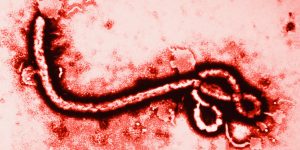 There has been a lot of discussion lately about how quickly Ebola has spread and how little we know about it. Not only are our concerns growing for people but also our pets! Recently there has been a dog in Spain and a dog in Dallas who have been exposed to the disease but their cases were handled very differently.

What is Ebola? Ebola is an extremely infections disease that is most often fatal. Symptoms include fever, sore throat, muscle pain, headaches, vomiting, diarrhea, and rash. The World Health Organization has stated that the start of Ebola came by the exchanging of bodily fluids with infected animals (fruit bats, primates, and antelope). It is now spreading from human to human at an alarming rate.

Nina Phan is the first nurse in Dallas to be diagnosed with Ebola. At home she has an adorable dog named Bentley who has been moved to a secure naval air base where he is being monitored. As of right now there is not enough information to know if a dog can host the disease and spread it to humans. The current plan is to keep Bentley in quarantine for 21 days and there are no plans to euthanize. A veterinarian has been monitoring Bentley daily to observe his health and he is being kept in an environment that is as homelike as possible with plenty of toys to keep him occupied.

Recently in a similar situation in Spain a dog by the name Excalibur was euthanized because he was believed to be harboring the virus. Spain official’s state that euthanasia was necessary to ensure they contain the virus regardless of the public outcry to save Excalibur. Since there is limited information at this time there is no telling if quarantine a pet, such as in the United States, will have long term implications.

The Centers of Disease Control and Protection along with the American Veterinary Medical Association and the United States Department of Agriculture are currently working together on official guidelines for those pets that have been exposed to Ebola. There is no evidence that dogs can give the disease to humans. Unfortunately without much information about how the virus is transmitted it is difficult to say what processes need to be put into place.

Font Resize
Contrast
Accessibility by WAH
Call Us Text Us